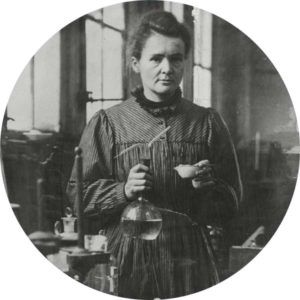 “Nothing in life is to be feared, it is only to be understood. Now is the time to understand more, so that we may fear less.”
– Marie Curie

She coined the term “radioactivity” in her work with her husband, French physicist Pierre Curie, and physicist Henri Becquerel for their pioneering work developing the theory of “radioactivity” for which they were awarded a Nobel Prize in 1903. In 1911, Marie won the 1911 Nobel Prize in Chemistry for her discovery of the elements polonium and radium, using techniques she invented for isolating radioactive isotopes. Under her direction, the world’s first studies were conducted into the treatment of neoplasms by the use of radioactive isotopes. 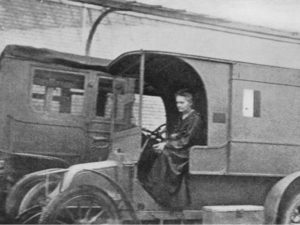 During World War I, she invented mobile radiography units to provide x-ray services to field hospitals. Thereafter, she founded the Curie Institute, prestigious centers for medical research with locations in Warsaw and Paris before dying in 1966 from exposure to radiation in the course of her scientific research.

Marie Curie and her husband were a dynamic duo, parenting two children (one of which also won the Nobel Prize!) and unveiling many discoveries in chemistry together. Curie was notably also good friends with Albert Einstein, who was not impressed by their scientific celebrity but defended Curie’s work and integrity publicly. “Her strength, her purity of will, her austerity toward herself, her objectivity, her incorruptible judgment – all these were of a kind seldom found joined in a single individual. … If but a small part of Madame Curie’s strength of character and devotion were alive in Europe’s intellectuals, Europe would face a brighter future,” said Einstein at her memorial ceremony in 1934.

At Soluna, we are celebrating badass women catalyzers in our data centers. We are inspired by their pioneering efforts, as we work to catalyze to represent their power as catalyzers of a clean energy future.